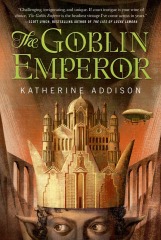 Dark fantasy author Sarah Monette, writing under the pseudonym of Katherine Addison, crafted this tale about the young, half-goblin son of an elven emperor who surprisingly ascended his father’s throne after an “accident” kills his father and three elder brothers.

Maia is 18, the product of a failed marriage attempting to cement a treaty between the elves and goblins. His mother had died ten years previous, and he now lives with an abusive cousin in a remote chalet, removed from court intrigue and forgotten by his father. Upon notification of the airship accident that killed the rest of the line of succession, however, he quickly assumes the royal “we” and heads to the Untheileneise Court.

Viewed with contempt by the courtesans and bureaucrats, unsure of his own abilities, and feeling distanced by his rapid ascension to power, Maia must take charge of the country and solve the mystery behind his family’s deaths.

Maia is an instantly likeable character, and you feel for him as he second guesses himself and tries to inject humanity into his powerful position. He has a lot of emotional baggage, and a good deal of the book is him coming to terms with his mother’s neglect at his father’s hand, as well as his own abuse at his cousin’s. There are threats on his life, terrorist plots and civil unrest that have to be addressed – and he needs to find a bride!

In the end he wins the love of his people and is hailed as a kind and generous leader, of course.

All while choking out names and titles that would make J.R.R. Tolkien jealous. Monette holds a PhD in medieval literature and clearly enjoyed the world-building exercise behind The Goblin Emperor, paying zealous detail to the intricacies of court life and a fully formed language.

Unfortunately the court structure was sometimes incomprehensible and the language possessed far too many consonants. Both became confusing quickly. Following the characters was even worse; the names changed depending on the formality by which they were addressed, and I found myself often having to refer to the name guide at the back of the book to keep track of everyone.

The language wasn’t the only problem. As much as I liked Maia, I didn’t  care what happened to him. Everything felt milquetoast, even the threats never seemed that threatening.

After all the praise I’d read about this new fantasy, I wanted to like it. In the era of “grimdark” authors like Joe Abercrombie and George R.R. Martin, I can understand why this sweet little tale would find an audience. And as cynical as I can be, I do appreciate a story where everyone lives happily ever after. But between the tongue-twisting names and the white bread plot, The Goblin Emperor didn’t engage me enough to care.

I am a freelance writer and critic from Phoenix Arizona. I spent 10 years covering music, the arts and pop culture for the “Arizona Republic” before life circumstances took me away from newspaper. But I never lost my joy at writing. Or reading.
View all posts by Michael Senft →
This entry was posted in Reviews, Two Stars and tagged coming-of-age, fantasy, Goblin Emperor, Katherine Addison, Michael Senft, new release, relentless reading, relentlessreading.com, Sarah Monette, steampunk, The Relentless Reader. Bookmark the permalink.

12 Responses to Review: The Goblin Emperor by Katherine Addison