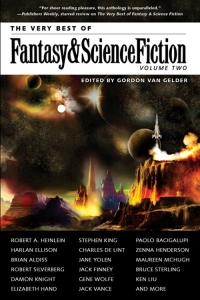 In 2009 Tachyon paid tribute to the 60th anniversary of “The Magazine Fantasy & Science Fiction” with The Very Best of Fantasy & Science Fiction, an exquisite anthology the featured some of the finest short fiction ever published, including Kurt Vonnegut’s “Harrison Bergeron”, Daniel Keyes’ “Flowers for Algernon” and Shirley Jackson’s “An Ordinary Day, With Peanuts”.

This year they’ve brought us Volume Two. And it is a welcome follow-up.

The story lineup isn’t quite as stellar, but it is still pretty damn impressive – from classics like Robert Heinlein’s “All You Zombies” and Harlan Ellison’s “Jeffty Is Five” to modern offerings including Paolo Bacigalupi’s “The People of Sand and Slag” and Ken Liu’s 2011 offering “The Paper Menagerie”, which became the only work to win the triple crown of Hugo, Nebula and World Fantasy Awards.

Some of the stories, especially the Heinlein, show their ages, but the collection demonstrates F&SF’s knack for showcasing the best writers of its time. Favorite stories include Jack Finney’s “The Third Level”, a 1952 offering about a man who finds a lower level in Grand Central Station that acts as a portal to another time. It has a dreamlike feel reminiscent of Neil Gaiman.

The Prize of Peril” by Robert Sheckley was another welcome find. The 1956 story predicted the reality TV boom of the 21st Century. The titular TV show features a protagonist being hunted to death on a TV show, complete with a game-show announcer and call-in “Good Samaritans” who offer assistance to the hero. Shades of Stephen King’s The Running Man? I truly heard Richard Dawson’s voice whenever the announcer spoke.

But Liu’s offering was the story I most anticipated.

And it was the most rewarding, a touching tale of Jack, a Chinese-American boy growing up trapped between two cultures. His mother was a mail-order bride who fled the Cultural Revolution and seeks to share her culture with Jack through magical origami animals. As he grows older he rejects her and his Chinese ancestry, but ultimately rediscovers his heritage through those forgotten folded-paper toys. The beautiful story deserves every accolade it has received.

Other authors featured in the collection include Jack Vance (“Green Magic”), Gene Wolfe (“The Friendship Light”), Brian Aldiss (“A Kind of Artistry”), Geoff Ryman (“Have Not Have”), Bruce Sterling (“Maneki Neko”), Charles DeLint (The Bone Woman”) and even Stephen King (“The New York Times at Special Bargain Rates”).