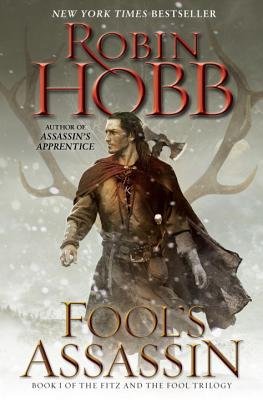 A confession – I skipped ahead.

Rather than reading the rest of the Farseer and Tawny Man trilogies that followed Assassin’s Apprentice, I jumped to this, the latest in Robin Hobb’s ongoing saga of FitzChivalry Farseer and his friend the Fool. But I don’t think my ignorance of the previous five books  hampered my appreciation of this, the first entry in the new “Fitz and the Fool” trilogy and Hobb’s return to these characters after a decade.

Rather, it felt a lot like reconnecting with an old friend from high school on Facebook. You don’t know what they’ve been up to for 20 years, but it is refreshing to fall into familiar patterns from the past. Things may get revealed along the way that you weren’t aware of, but they only pique your interest to revisit and spend more time with them.

When I left Fitz, he was the bastard son of the late Prince Chivalry, trained as the king’s assassin. He had just completed his first “job” and survived an attempt on his life from his uncle, Prince Regal.

Coming back to him in Fool’s Assassin, 30 years have passed. He is now Tom Badgerlock, married to his childhood crush Molly, living in Withywoods, the remote country manor of Chivalry’s wife Patience. No longer an assassin, he has helped raise Molly’s children and is content with the country life, far away from court intrigue.

But his past starts creeping back when Molly gets pregnant far past menopause and gives birth to a tiny, pale girl, who spent over two years in the womb. The child, named Bee, grows slowly and may be the key to a cryptic message that Fitz has received from the long absent Fool.

I enjoyed catching up with Fitz and although I hadn’t read the previous books, I never felt out of my depth. If anything Fool’s Assassin made me want to discover more about the deep friendship between Fitz and the Fool, his relationship with Molly and her backstory, and what drove him away from Buckkeep Castle.

I also liked the day-to-day quality of most of the book. It was a comfortable way to ease back into my relationship with Fitz as he lived the life of a landed gentleman in the country. There is little action throughout most of the book, but I enjoyed lingering in the character development of Fitz and Molly. Indeed, the leisurely pace of the book made the exciting climax almost feel out of place, but not unwelcome.

I did have some serious issues with the book, however. And I don’t think they were due to not reading the previous books.

Like Assassin’s Apprentice, the novel is narrated first person from Fitz. However, halfway through Hobb introduces narration from Bee as well. While this makes sense for the story and provides essential insights into her character, it made broke up the flow and seemed disjointed at first. Maybe Hobb is transitioning to Bee as the main voice for future books, but in Fool’s Assassin, the switch felt awkward.

I also found the ending problematic. Unlike Assassin’s Apprentice, which was self-contained although a part of a trilogy, Fool’s Assassin ended on a cliffhanger. Much of the book felt like a prologue, rather than the actual story. It has been 10 years since Hobb wrote about Fitz and the Fool, perhaps this book was as much an easing back into the characters for her as it was a reintroduction for the readers.

My biggest complaint was the messianic nature of Bee though. Again, this could be influenced by my not reading the other books, but apart from the Skill and Wit magic, Assassin’s Apprentice did not dwell on the supernatural. From this book I do see that Hobb delved more into the supernatural as the series progressed, but it still felt uncomfortably clichéd to have a precocious child born under strange circumstances, wise beyond her years and speaking cryptically. David Eddings, I’m looking at you.

I also wanted to shake Fitz for not figuring out the meaning behind Bee’s mysterious origin!

Despite those quibbles, however, I’m not giving up on this series and would still recommend it. If anything I’ve got another five or so books to catch up, then another trilogy to finish in the coming years. Because despite my disdain for that cliffhanger, it hooked me.

I am a freelance writer and critic from Phoenix Arizona. I spent 10 years covering music, the arts and pop culture for the “Arizona Republic” before life circumstances took me away from newspaper. But I never lost my joy at writing. Or reading.
View all posts by Michael Senft →
This entry was posted in Reviews, Robin Hobb, Three Stars and tagged Assassin's Apprentice, Epic Fantasy, Farseer, Fitz and the Fool, Michael Senft, relentless reading, relentlessreading.com, Robin Hobb, Tawny Man, The Relentless Reader, Trilogy. Bookmark the permalink.