Retro Review: The Door Into Summer by Robert Heinlein 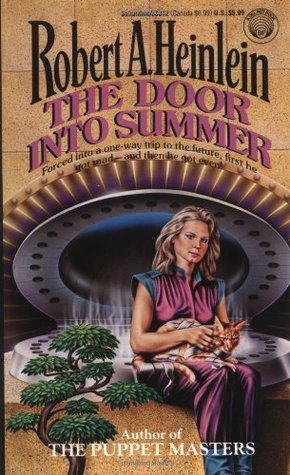 Heinlein’s classic time-travel novel “The Door Into Summer” is sadly out of print in the U.S.

I’ve had an intimate and often uneasy relationship with Robert Heinlein’s work for almost 40 years.My dad introduced me to his novels when I was seven or eight. We were going on a cross-country vacation and he gave me a pile of dog-eared paperbacks to keep me company.

Citizen of the Galaxy. The Rolling Stones. Starman Jones.

And, of course, Have Spacesuit, Will Travel.

I devoured those books on that trip, and I can honestly credit them with setting me on the path which has brought me to this blog. I loved Heinlein’s adventures in space and I sought out his books at every opportunity.

As I got older, however, I started to see the ideas underpinning his adventure stories. The anti-government screeds, the Libertarianism and fascism. The misogyny. The racism. The uncomfortable sexual ideas.

The novels still engaged me, though. Indeed, The Moon is a Harsh Mistress and Stranger in a Strange Land rank among my top five favorite sci-fi novels, and Starship Troopers isn’t far behind. But books like Time Enough for Love and especially Farnham’s Freehold left an unpleasant taste in my mouth. Not because of the offensive ideas, but because I enjoyed the stories tremendously, despite the offensive ideas. I felt unclean after reading them.

Which brings us to The Door Into Summer.

Originally published in 1957, the novel lands between Heinlein’s YA work like Have Spacesuit and his big idea novels like Starship Troopers and Stranger in a Strange Land. It doesn’t have the acclaim of his best work, but it is still a respected entry in his canon.

The Door Into Summer is the story of Dan Davis, a Steve Jobs-like engineer who invents the Hired Girl, an automated vacuum to ease housework. As he is preparing his greatest invention, an automated butler/nanny/maid, however, he is swindled by his girlfriend and business partner, losing his stake in his company. He chooses to enter cryogenic sleep with his beloved cat to exact his revenge thirty years in the future.

Circumstances don’t turn out the way he planned, however, as he finds himself penniless and alone in an alien future. It then turns into a jumble of time-travel paradoxes that resolve with Davis winning the girl, finding his cat, reclaiming his fortune and getting credit for his work.

The Door Into Summer exemplifies everything I love about Heinlein — fast pacing, crackling narration and dialogue, and tight plotting. Even Pete the cat, probably the best part of the novel, was reminiscent of other works of his. You can tell Heinlein loved his cats.

And his vision of the future is striking in many ways. He does get a lot of details wrong, but his description of the Hired Girl is almost a dead ringer for the Roomba, and his predictions about the growth of Los Angeles are prescient as well.

However, The Door Into Summer also showed all of the traits that have troubled me since I started looking at his work with a more critical eye. There are a few mildly racist references in the novel, talking about riots and the ethnic cleansing of whites in South Africa. Nowhere near the level of Farnham’s Freehold, but still evident. And Dan’s girlfriend Bella, is portrayed in a completely negative light, scheming and swindling the self-made hero out of his fortune. And when Dan encounters her in the future, she has lost all her sex appeal — an older woman that is of no use to a man, only worthy of his pity.

But the creepiest part of the story was Dan’s pedophilia. He expresses his love for his partner’s stepdaughter Ricky, who is ten at the time. She has a crush on him, and he returns her affection with promises of marriage. And in the end, through the miracle of cryosleep, the couple is reunited when she is of legal age.

U.K. readers can still enjoy “The Door Into Summer” thanks to Gollancz’s S.F. Masterworks series.

Heinlein has always had a thing for younger women, casting aside the matronly wife for the friend’s daughter reoccurs in several of his books, but this is one of the more extreme examples. It never enters the realm of child molestation, but it still casts an unsavory light of a classic novel.

Yet I couldn’t put it down. It was an enjoyable read; while not on the level of his masterpieces, it was better than many of his novels, especially his preachier (and creepier) 70s and 80s work. And Pete the cat was simply adorable, easily the best character in the book.

So, as I usually do with Heinlein’s work, I’m willing to excuse the ick factor.

The Door Into Summer is currently out of print in the US but is available as an eBook through Amazon and Barnes & Noble. In the UK it is available as part of Gollancz’s S.F. Masterworks series.

I am a freelance writer and critic from Phoenix Arizona. I spent 10 years covering music, the arts and pop culture for the “Arizona Republic” before life circumstances took me away from newspaper. But I never lost my joy at writing. Or reading.
View all posts by Michael Senft →
This entry was posted in Reviews, S.F. Masterworks, Three Stars and tagged cat, Door Into Summer, Michael Senft, pedophile, Relentless Reader, relentlessreading.com, review, Robert Heinlein, Roomba, time travel. Bookmark the permalink.

3 Responses to Retro Review: The Door Into Summer by Robert Heinlein