Review: “The Genome” by Sergei Lukyanenko 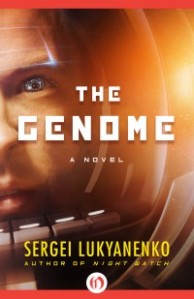 Sergei Lukyanenko’s parody of cyberpunk and space opera is now available in America.

Wow – I read two Russian sci-fi novels in one year!

Before I started this little venture, I read the classic Roadside Picnic, by Arkady and Boris Sturgatsky. And now I find myself wrapping up the year with The Genome, Sergei Lukyanenko’s playful parody of cyberpunk and space opera that examines genetic engineering and its impact on the human soul. The Kazakh Lukyanenko is well known worldwide for his urban fantasy series “The Night Watch”, which has spawned popular movies in his native Russia.

Originally published in 1999, The Genome follows Alex Romanov, a genetically modified human designed to be the ideal starship pilot. The novel opens with him leaving a hospital on the planet Quicksilver Pit, where he has been recuperating and regrowing the lower half of his body following a ship accident.

He soon befriends the young Kim O’Hara, a 14-year-old homeless urchin whose genetic modifications are just beginning to manifest. While trying to find a job to help support the girl, he is offered the perfect job — a well-paying captaincy on his own starship, with the freedom to choose his own crew.

The initial feel of the book reminded me of Firefly, a crew of misfits banded together on their ship. The banter was witty the characters divers, and particularly well defined. Everyone carries secrets, and the murder of one of the aliens while the ship is docked at the planet Zodiac brings those secrets to light.

At that point the second half of the book becomes a classic whodunit. A genetically modified clone based on Sherlock Holmes is called to investigate and the novel takes a philosophical turn, with Lukyanenko’s examining the nature of free will and the nature of humanity.

Lukyanenko pokes fun at the West throughout the novel, parodying consumerism with restaurants like McRobbins, a portmanteau of McDonald’s and Baskin-Robbins, and the Hilton hotel chain, which has eschewed luxury in the future, becoming the Motel 6 of interstellar travel. Yet he also shows a deep love of Western literature. In addition to the obvious Arthur Conan Doyle reference, Kim’s name is an homage to the titular hero of Rudyard Kipling’s novel.

He also has fun playing with writing conventions – the final section of The Genome includes an acrostic puzzle, which, when solved yields the message:

“This novel is a parody of  and cyberpunk. The author values your sense of humor…”

The Genome also owes a lot to Robert Heinlein. Lukyanenko has cited the sci-fi master as a major influence, and the books overarching themes of self-determinism echo Heinlein’s own libertarian philosophy. Alex dares to dream of a life not constrained by his genetic predestination, and, in typical Heinlein heroic fashion, he gains his dream.

Unfortunately the book felt disjointed to me. The “Locked-Room Mystery” portion distracted me from the more philosophical aspects of the latter half of the book, and drew me away from the grandiose sweep of the space opera. I also found the book contained a touch of the Heinlein “ick factor”, with Alex and Kim developing a relationship that was essentially statutory rape.

A shame, because the first half of the book was a breathless read. And Lukyanenko’s Eastern take on libertarianism made for a more compelling argument than most libertarians I’ve encountered in real life.

I am a freelance writer and critic from Phoenix Arizona. I spent 10 years covering music, the arts and pop culture for the “Arizona Republic” before life circumstances took me away from newspaper. But I never lost my joy at writing. Or reading.
View all posts by Michael Senft →
This entry was posted in Reviews, Three Stars and tagged Cyberpunk, Michael Senft, Open Road Media, relentless reading, relentlessreading.com, Sergei Lukyanenko, space opera, The Genome. Bookmark the permalink.