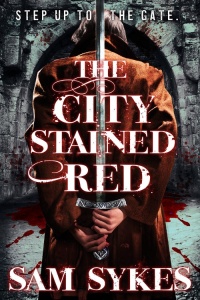 As promised, here is my interview with Sam Sykes, which ran in the Arizona Republic on Sunday, Jan. 25.

He talks about his new book, The City Stained Red, which hits stores today, as well as how his background as a drama geek influenced his writing.

You can also read a couple outtakes from the interview here and here.

Sykes is hosting a release party for The City Stained Red at The Poisoned Pen in Scottsdale on Jan. 31. Joining Sykes will be Nika Harper, host of the popular Geek & Sundry vlog Worldplay, who will sign copies of her short story collection, Echoes of Old Souls.

Read my review of The City Stained Red here. And as Sam is wont to pop up dramatically and remind you, “Buy his book!”

I am a freelance writer and critic from Phoenix Arizona. I spent 10 years covering music, the arts and pop culture for the “Arizona Republic” before life circumstances took me away from newspaper. But I never lost my joy at writing. Or reading.
View all posts by Michael Senft →
This entry was posted in Interviews, Signing and tagged AZCentral.com, City Stained Red, Echoes of Old Souls, Geek & Sundry, Interview, Nika Harper, Poisoned Pen Bookstore, Release Party, Sam Sykes, Wordplay. Bookmark the permalink.