January was busy, but after a busy first week, February seems to be tapering off. Here is a look at some of the new titles coming next month. And it looks like I’m going to reviewing most, if not all, of them.

Neil Gaiman follows up the haunting Ocean at the End of the Lane with his third collection of short prose and poetry. Trigger Warning contains a host of previously released gems, like “The Truth Is a Cave in the Black Mountains,” fictional tributes to Jack Vance, Gene Wolfe and Ray Bradbury, works inspired by his wife Amanda Fucking Palmer, and a Dr. Who short story, “Nothing O’clock” . The big treat, however, is “Black Dog”, a new story featuring Shadow, the protagonist from Gaiman’s masterpiece American Gods. 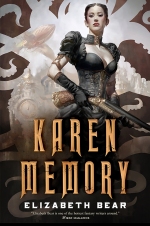 After wrapping up the Mongol-inspired epic fantasy “Eternal Sky” trilogy last year with the acclaimed Steles of the Sky, Bear has moved on to steampunk with her latest. Karen Memory is already turning heads thanks to the stunning cover, but the Hugo award-winning Bear proves that what is inside counts as well. Set in Rapid City, an alternate Seattle filled with airships, the story follows Karen Memery (like Memory with an “e” as she says) an orphan raised in a bordello. When an injured prostitute arrives seeking shelter, Karen and her fellow prostitutes get entangled in the search for a serial killer.

McClellan’s “Powder Mage” trilogy reaches its thrilling conclusion as Field Marshal Tamas, Adro’s would-be conqueror, returns to find his city has been captured by the enemy and he does not know who he can trust in his rebellious army. At the same time, Inspector Adamat is still searching for his kidnapped son and finds his fate and goals once again intertwined with Tamas. The key to everything seems to be Tamas’ son Taniel Two-Shot, a powerful powder mage who could be the kingdom’s (and his father’s) salvation.

Cold war erupts between America and Great Britain in Hieber’s paranormal gaslamp fantasy. After the assassination of Abraham Lincoln, the American government starts researching the “Eterna Compound”, an elixir believed to grant eternal life, under the auspices of psychic Clara Templeton. In the meantime, Queen Victoria is also trying to find this mysterious compound, and has the policeman and skeptic Harold Spire leading the team to recover it. In the meantime, the American research headquarters has been destroyed, and no one knows who absconded with the Compound.

Fans of CSI and urban fantasy will love this thriller set in a world where magic is addictive and illegal. Wells’ “Prospero’s War” series continues as investigator and former magic addict Kate Prospero hunt a killer in the magical underworld of Babylon, Ohio. With a coven war looming and an investigative journalist looking into Prospero’s own past, the crime is leading to the upper echelons of Babylon’s government.

Lord Grimdark’s YA trilogy, “The Shattered Sea” continues. The novel follows Thorn, a young woman seeking to avenge her father’s death. Her path to revenge gets her entangled in the machinations of Father Yarvi, the cunning minister of Gettland (and star of the previous entry, Half a King). She is joined by Brand, a warrior who hates to kill, who is seeking redemption. The series doesn’t have the blood, gore or moral ambiguity of Abercrombie’s acclaimed “First Law” series, but that doesn’t mean he skimps. It’s just that rather than a hard-R world with no hope, “The Shattered Sea” skirts the border with PG-13.

As always, let me know if there’s anything I missed!

I am a freelance writer and critic from Phoenix Arizona. I spent 10 years covering music, the arts and pop culture for the “Arizona Republic” before life circumstances took me away from newspaper. But I never lost my joy at writing. Or reading.
View all posts by Michael Senft →
This entry was posted in New Releases, News and tagged Autumn Republic, Brian McClellan, Deadly Spells, Elizabeth Bear, Eterna Files, Half the World, Jaye Wells, Joe Abercrombie, Karen Memory, Leanna Renee Hieber, Neil Gaiman, Trigger Warning. Bookmark the permalink.