Okay, permit me a bit of squee here.

Leckie rocked the Sci-Fi/Fantasy world in 2014, winning the Hugo, Nebula, Clarke, BSFA and Locus awards with Ancillary Justice. The novel follows Breq, a sentient spaceship whose consciousness inhabits a human body, or ancillary, as she seeks revenge on the imperial leader who destroyed her ship and crew. An unusual premise for a space opera, made all the more intriguing because Leckie only uses female pronouns throughout the novel. She also manages to work her love of tea and shape-note singing into the novel. 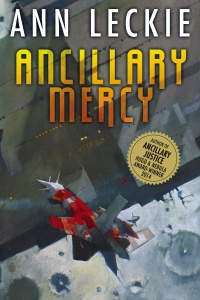 The finale to Leckie’s “Imperial Radch” trilogy, Ancillary Mercy, comes out on Oct. 6

The follow-up, Ancillary Sword, came out to equal acclaim last October and has already garnered a Nebula nomination. The Hugo nominations will be announced in a couple weeks, but it is already a heavy favorite.

Seriously, if you haven’t read them, pick them up. Now.

I am a freelance writer and critic from Phoenix Arizona. I spent 10 years covering music, the arts and pop culture for the “Arizona Republic” before life circumstances took me away from newspaper. But I never lost my joy at writing. Or reading.
View all posts by Michael Senft →
This entry was posted in News, Phoenix Comicon. Bookmark the permalink.