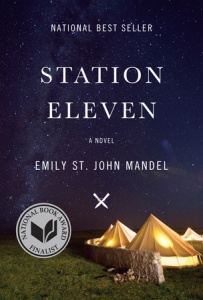 Station Eleven, the tremendous post-apocalyptic novel by Emily St. John Mandel, has won the 2015 Arthur C. Clarke Award. One of the most prestigious awards in science fiction, the juried award is presented to the best science fiction novel in Great Britain.

The novel, follows a troupe of musicians and actors as the travel through the overgrown landscape of the Great Lakes in the wake of a flu epidemic that killed 90% of the world’s population. The itinerant performers are attempting to remind the survivors that “Survival is insufficient,” while reuniting with the scattered remnants of civilization at a mythical airport-cum-museum.

The story alternates time frames and perspective between various survivors, all interconnected with Arthur Leander, a Hollywood actor who died onstage during a production of King Lear. The novel was also shortlisted for the National Book Award. It was also in my Top Ten reads from last year.

I am a freelance writer and critic from Phoenix Arizona. I spent 10 years covering music, the arts and pop culture for the “Arizona Republic” before life circumstances took me away from newspaper. But I never lost my joy at writing. Or reading.
View all posts by Michael Senft →
This entry was posted in News and tagged Arthur C. Clarke Award, Emily St. John Mandel, Station Eleven. Bookmark the permalink.