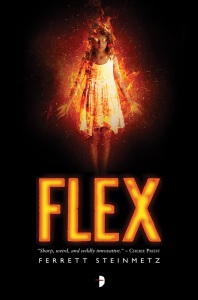 It’s Walter White meets Harry Dresden in this wonderful debut by Ferrett Steinmetz. In Flex, magic, or ‘mancy, is a way of bending the will of the universe that manifests from geeky obsessions, there’s gamermancy, illustromancy, musclemancy. Of course for every magical action there is a reaction, called the flux, where the universe attempts to put itself right. ‘Mancy is illegal after a cataclysmic flux event destroyed Europe at the end of World War II. Mancers are hunted and brainwashed by the government turned into mancer-hunting drones themselves.

In this world Paul Tsabo is an insurance agent, attempting to prove magical cause in insurance claims. His secret, of course, is that he is also a ‘mancer, a bureaucromancer, whose power lies in the manipulation of paperwork to reshape the order of the world.

And when his daughter is badly injured in an explosion caused by a non ‘mancer tripping on “flex”, a drug made of distilled magical power, he sets out to find the source of the explosion.

Flex is a clever, funny twist on both the urban fantasy genre overpopulated by werewolves, vampires and hard-boiled sorcerers. But it is also a wonderful deconstruction of the Breaking Bad story of the good man driven to evil by necessity and megalomania, because while Tsabo’s story has a similar genesis as Walter White’s he never becomes Heisenberg.

Read my full review at “The Nameless Zine”.

I am a freelance writer and critic from Phoenix Arizona. I spent 10 years covering music, the arts and pop culture for the “Arizona Republic” before life circumstances took me away from newspaper. But I never lost my joy at writing. Or reading.
View all posts by Michael Senft →
This entry was posted in Reviews and tagged Flex. Bookmark the permalink.