This week’s subject is “Orphans”:
What a (not-so) tough trope to return to the travels with! Orphans are the cornerstone of Fantasy. You can’t shake a stick without hitting some foundling destined to save the world. I’m actually having trouble thinking of a fantasy hero who ISN’T an orphan. So I’m gonna cast a little farther afield here and avoid the Kvothes and Vins and Harrys and Lockes and Rand Al’Thors and Frodos and Lukes when looking for orphans who made good. But let’s get started as always with…

I wanted to avoid the obvious this week, but I have to start with my personal Tough Guide, David Eddings. Garion is the archetypal fantasy orphan, perhaps more so than Rand Al’Thor. Destined to wield the sword of the Rivan King and bear the Orb of Aldur in a battle against the dread god Torak, Garion started as a humble farmboy, raised by his Aunt Pol, the immortal sorceress Polgara, after his parents were burned alive by the evil Grolim Chamdar.

The healing heroine of Cato’s “Clockwork Duology” lost her parents during the war between the Caskentians and the Wasters when an aerial battle over her village ended with a Waster airship crashing in a fiery conflagration, a ‘la the Hindenberg. The crash was the result of a daring attack by General Solomon Garret (the father of Octavia’s future husband Alonzo) which sadly killed hundred, but likely spared thousands in the endless war. It also led Octavia to a life as a medician at Miss Percival’s school, where she discovered her knack for healing. 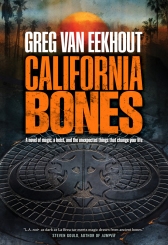 It’s got to suck becoming an orphan by watching your father get eaten. But that’s the way things end for upstart osteomancers in Los Angeles. Blackland’s father crossed the Heirarch, an ancient wizard who gained his powers by eating the bones of magical creatures, and on occasion, other osteomancers. Actually, Blackland’s mother is still alive, having fled north to San Francisco, leaving young Daniel to grow up on the street as a petty thief. His father left him a gift, however, powerful osteomancy that would allow him to gather his own gang of thieves and eventually face the Hierarch above the Hollywood Hills.

Zamia — Throne of the Crescent Moon by Saladin Ahmed

As Elizabeth Bear described her, “the kick-ass tiger (sic) girl.” Actually she’s a lion girl, but Zamia’s thirst for vengeance over the massacre of her tribe and family by ghuls drove her to team up with ghul hunter Dr. Adoulla and his dervish bodyguard Raseed to defeat the source of the ghuls. Her wildness is out of place in the sprawling city of Dhamsawaat but she is still a brave and occasionally impulsive part of Adoulla’s cadre. One of the coolest parts of Throne is how Saladin subverts the orphan trope, Zamia is a powerful heir seeking vengeance, but she really is secondary to Adoulla and his elderly partners in the final battle.

Veranix Calbert— The Thorn of Dentonhill
by Marshall Ryan Maresca

Veranix is fantasy’s Bruce Wayne. His father was a mobster and archery expert, his mother an acrobat, and he was raised in a circus. Until his father ran afoul of the local mob boss and was killed, while Veranix’s mother was driven mad with drugs. So Veranix begged his way into magic college and adopted the secret identity of “The Thorn”, using his acrobatic and archery skills to disrupt the drug trade and seek vengeance against Fenmere, the mob boss responsible for his parents’ deaths.

I am a freelance writer and critic from Phoenix Arizona. I spent 10 years covering music, the arts and pop culture for the “Arizona Republic” before life circumstances took me away from newspaper. But I never lost my joy at writing. Or reading.
View all posts by Michael Senft →
This entry was posted in Tough Traveling and tagged Beth Cato, Clockwork Crown, David Eddings, Greg Van Eekhout, Marshall Ryan Maresca, Michael Senft, Orphans, relentlessreading.com, Saladin Ahmed, Thorn of Dentonhill, Throne of the Crescent Moon, Tough Traveling. Bookmark the permalink.