Brian Staveley talks about “The Chronicles of the Unhewn Throne”

And now to (finally) kick off a weekly series (for the next couple months) of interviews from Phoenix Comicon.

We start off with Brian Staveley. The college professor from Vermont is a Gemmell Morningstar finalist and earned a Locus nomination for his debut The Emperor’s Blades, which kicked off his trilogy “The Chronicles of the Unhewn Throne.” The second volume, The Providence of Fire, hit stores in January and the final volume, The Last Mortal Bond, comes out next March.

Staveley graciously took some time away from his fans at Kevin Hearne’s pre-Con Elevengeddon celebration at The Poisoned Pen to chat briefly about the series and his upcoming plans. 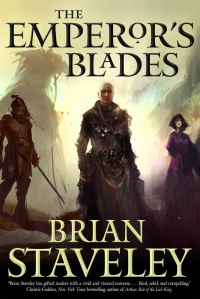 Thanks for taking some time to chat, can you tell us about “The Chronicles of the Unhewn Throne?”

It’s an epic fantasy trilogy, and the first novel The Emperor’s Blades follows the three adult children of the emperor — a monk, a special forces soldier and a politician. And they’re trying to figure out who killed their father and try to stay alive. Because the conspiracy doesn’t end there.

That’s the first book. In The Providence of Fire, as often happens, things get bigger and bigger, wheels within wheels, alliances that seem ironclad in the first book, get twisted.

The thing that struck me about the first novel, there were so many misunderstandings and miscommunication that could have been solved if there were some way to communicate between the three.

If you think about the pre-modern world, that was very much a part of military strategy. I teach ancient history and I’d be lecturing on the Vikings or something, and my students would always ask “Why didn’t the French just move away from the North Coast?” Assuming they even had somewhere to go, the notion of communication to plan for something like that is a modern conceit. How would they know where was safe? Or even when was a good time to leave?
I think the same thing is happening in a pre-modern fantasy novel. That is frustrating for some readers, but it’s also exciting — it’s another obstacle for the characters to overcome.

Well, it’s also where the conflict and the plot come from. If they were all able to get together and compare notes, there wouldn’t be a book.

And in the second book some of the characters do get together and compare notes, and they find that they’ve been apart so long and they have such divergent views of the events, it’s almost too late. It’s not enough at that point to put them together in a room and say “work this out.” They’ve been separated geographically too long for too long. Geographical separation leads to emotional and psychological separation as well.

The second book really played with perceptions of how the story was going to progress. You think you have everything lined up, then you see it from another perspective.

Kaden, one of the main characters who is training to be a monk, he is supposed to inherit the empire and he doesn’t understand anything about politics or the empire. He wasn’t able to make that transition. He’s supposed to take the throne, but he’s in no shape emotionally or psychologically to do it. 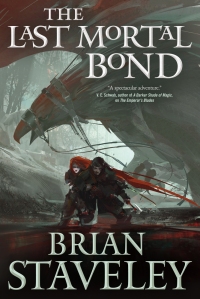 The Last Mortal Bond is due next March. What are your plans after?

I want to keep working in the same world. I’ll probably write some standalone novels, maybe that follow some of the secondary characters. There are a lot of characters in the novels that are fan favorites but aren’t point-of-view characters like the Flea, that people have been bugging me to write about. And I’m excited to be able to explore them.

Will it be more backstory on the world?

Finally, what are your thoughts about Phoenix Comicon?

This is my first Con and I’m really excited about the robust writing track. It feels like I’m sitting down with my whole Twitter feed tonight. It’s pretty neat. And it will be even more exciting when we start talking on panels and meet the fans. 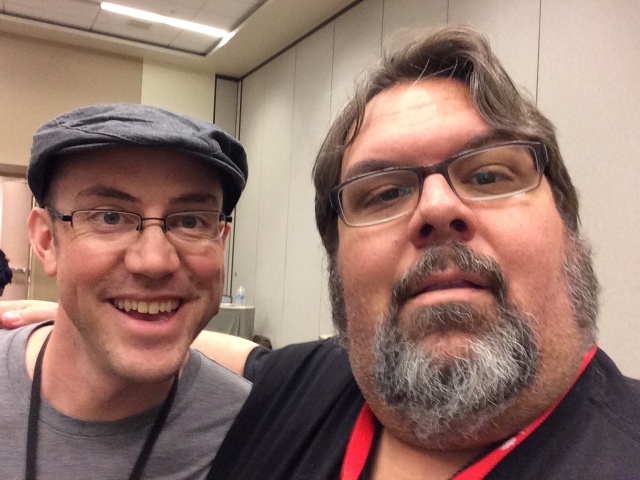 I am a freelance writer and critic from Phoenix Arizona. I spent 10 years covering music, the arts and pop culture for the “Arizona Republic” before life circumstances took me away from newspaper. But I never lost my joy at writing. Or reading.
View all posts by Michael Senft →
This entry was posted in Interviews and tagged Brian Staveley, Chronicles of the Unhewn Throne, Emperor's Blades, Interview, Last Mortal Bond, Providence of Fire. Bookmark the permalink.